I usually explain three grammar rules, but in today’s lesson, I am especially covering two.

At first, I was going to cover three grammar rules as usual, but while I was writing the script about 할 줄 알다/모르다, even I was confused, too.

In addition, I thought today’s grammar would be a more difficult concept for learners, so I decided to explain it in as much detail as possible.

Also, this is our tenth lesson.

So, I have prepared a special gift for you, which is a small test! The test will cover from the sixth to the tenth lesson.

I made quizzes with lots of example sentences you learned in video lessons.

The test format is the same as TOPIK, so you can use it to prepare for TOPIK as well.

By taking the small test, I am sure you can get closer to passing TOPIK2, and be the super master of Korean!

Do you remember that you can express your ability by using 할 수 있다/없다 “can/cannot”?

To see the difference clearly, I will explain with the following examples.

Compared to 할 수 있어요, 할 줄 알아요 sounds more like I have already acquired the skill, and can use it well!

Therefore, you can give nuance to listeners that your level is over intermediate to advanced level.”

For the application of this grammar, you use it for verbs.

Additionally, in the 줄 part, you always pronounce the tense sound as 쭐, so keep it in your mind. It’s not 줄, but 쭐 with more tension.OK?

Now that you know how to use (으)ㄹ 줄 알다/모르다, let’s look at an example!

Here, 하다 is “to do.” But when you use 하다 to languages like 한국어 “Korean” and 영어 “English”, it means “to speak.”

in this sentence, since 하다 does not have a final consonant, you add -ㄹ 줄 알다/모르다 to the verb stem and make the phrase 할 줄 알다 “know how to speak,” 할 줄 모르다 “do not know how to speak.” Got it?

Now, let’s move on to the next example.

The part of 춤출 줄 sounds difficult to pronounce, doesn’t it?

춤출 줄, 춤출 줄, It is almost like a tongue twister.

Anyway, here, since 춤추다 “to dance” does not have a final consonant, you add -ㄹ 줄 모르다 to make 춤출 줄 모르다 “do not know how to dance.”

In this example, when you add -도 after 줄 and make the phrase -(으)ㄹ 줄도 알다/모르다, it emphasizes the meaning like do/do not even know how to do smth.

As you can see, this example sentence sounds a bit sarcastic.

So, please be careful when you say it to your friends.

Then, let’s deepen our understanding with some quizzes. Which one is the correct answer?

The correct answer is number two.

However, 끓이다 “to boil” sounds more natural in Korean.

Since 끓이다 “to boil” does not have a final consonant, you add -ㄹ 줄 알다 to make 끓일 줄 알다 “know how to boil.” Here, you want to ask “Does Tammy know how to cook ~?,” so you use 요 form and make the phrase 끓일 줄 알아요?

Number one is wrong because 끓여 봤어요? “Have you cooked ~?” is a phrase to ask about one’s experiences.

Okay, then let’s read it out loud together.

Please, read it at least three times. Then let’s move on to the next quiz.

옛날에는 글자를 ( ) 사람이 많았대요.
I heard a long time ago there were many people who did not know how to read letters.

The correct answer is number two. 읽다 is “to read,” and since it has a final consonant, you add -을 줄 모르다 to make 읽을 줄 모르다.

After that, you want to say “~who do not know how to read,” so you use -는 which makes a verb into the noun modifier.

And you make the phrase 읽을 줄 모르는.

Number one is wrong because grammatically, you cannot combine 못 and 줄 알다/모르다, so please keep that in mind.

Then let’s read it together.

Please practice with it at least three times.

So, the meaning seems to change into “knew/did not know how to do smth.”

However, it means a completely different thing like “I thought that / I didn’t know that.”

This is too tricky!

I think I heard that. Are you guys following me?

Even the meaning of 줄 알았다/몰랐다 slightly changes whether the noun modifier is the present tense or the future tense.

So, be careful with the pronunciation as well.

Then, please look at this table from 줄 알았다. 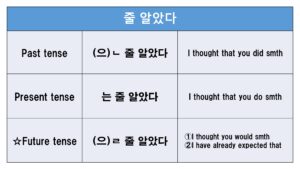 You can use 줄 알았다 when you misunderstood something.

It can be expressed with the past, present, and future tense.

Here, the future tense is a really important point because it has two different meanings.

One is “I thought you would do smth” and the other one is “I have already expected that.” or “I knew that.”

You can guess which meaning a speaker is trying to use by seeing the context and a facial expression.

Then, let’s look at some examples.

By the way, to explain easily, I will use “he” as the pronoun even though I don’t know if the speaker is a man or woman. OK?

The first one is the past tense.

In this situation, even though his mom did not clean, he thought that she had ‘already’ cleaned.

The next one is the present tense.

In this situation, he thought his mom is cleaning now, but she is not.

The next one is important! The future tense!

Here, the sentence has a future form, so it can be interpreted in two ways.

The first one would mean that it was misunderstood and unexpected.

So, at that time the speaker expected mom would clean, but she did not after all.

The second meaning would be “I have already expected that.” or “I knew it!,” so it is 엄마가 청소할 줄 알았어, 역시 우리 엄마야. “I knew that my mom would clean. That’s my mom.”

Can you see the difference between the two?

Then, let’s look at 줄 몰랐다 in the chart as well! 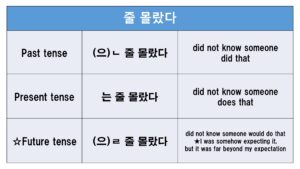 You use 줄 몰랐다 when you realized or got to know something for the first time. Please look through the table from the past tense, present tense, and future tense.

These are easy to understand.

Like English translation, this speaker is surprised by the fact, which happened in the past, not in the future.

It is so confusing because it is a future tense, but describes the past.

Oh, tricky, tricky. I will explain these concepts with more examples.

To understand it clearly, again, I will use the pronoun “he”here. Then, let’s see an example.

This is easy to understand, isn’t it?

It means that now he realized that his mom had “already” finished cleaning.

The next one is the present tense.

This means that the speaker did not know that his mom was cleaning now.

In English, I translate it in a present progressive way, such as “was cleaning.”

But in Korean, it is more like “mom cleans.” OK?

The last one is important, the future tense.

Therefore, even though it is the future tense, the speaker was surprised at the fact in the past. Crystal clear? I hope you do.

So far I think you got to understand examples of verbs.

Then, let’s look at an example

You can use this phrase when you stealthily eat some cake while your friend is sleeping.

Here, 자다 is a verb, so you add -는 줄 알았다 to the verb stem to make 자는 줄 알았다 “I thought that you were sleeping.”

For smooth translation, I use the past progressive tense in English such as “you were still sleeping,” but in Korean, it means “you still sleep”

As I said before, Korean people use 줄 알았다/몰랐다 when something unexpected happened like this example sentence.

So, they often use this grammar with 깜짝이야! or 엄마야! which means “Oh my gosh!.” Do you get it?

Then let’s move on to the next sentence.

난 엄마가 다 해 줄 줄 몰랐지.
I never thought my mom would do all of these things for me.

Also, his mom “did all of the things” on her own, so even though it is the future tense, the speaker is talking about what happened in the past. Crystal Clear?

Then, let’s deepen your understanding with some quizzes. Which one is the correct answer?

The correct answer is number two.

아프다 is “to be sick.” This is an important expression because many learners tend to recognize 아프다 as “to get hurt.”

But it has one more meaning, which is “to be sick.”

The number one is wrong because it means “I did not think that you were sick, you know?” and it got the opposite.

Okay, then let’s read it together.

I recommend you read this part several times. Let’s see the next one.

혼자 다 ( ) 모자랄 정도네요.
I thought I could not finish all by myself, but it is almost not enough.

The correct answer is number one.

못 먹다 is “cannot eat” and it has a final consonant.

You want to say “I thought that I could not finish it,” so you add -을 줄 알았다 to make 못 먹을 줄 알았다.

And then, you have to change it into “Even though~,” so you use -는데 to make 못 먹을 줄 알았는데.

Number two is wrong because it used the present tense 아는데.

This expression of “I thought that / I did not expect that” is always used in the past tense like -(으)ㄴ 줄 알았다/몰랐다.

Okay, then let’s read it out loud together.

Then, I’m going to give you a wonderful present of homework.
해바라기처럼 밝고 환하게!
Brightly and brilliantly just as a sunflower! Homework, come on!

The first assignment is to write two sentences using the grammar we learned today.

For the first sentence, please tell me about your ability that you acquired with some effort, using –(으)ㄹ 줄(을) 알다 “know how to do smth.” For example, I would make a sentence like,

For the second sentence, please use -(으)ㄴ 줄 알았다/몰랐다 “I thought that / I didn’t know that” and tell me something you have gotten to know recently and got surprised at.

For example,
제가 상 받을 줄 몰랐어요.
I didn’t know I was going to get an award.

I just wanted to make a sentence as if I were a celebrity who won the Academy Awards.

How can you be imaginative when you make your sentences? I am looking forward to reading your homework!

The second homework is to memorize new words.

Please, memorize the forty words from number 361 to number 400 on page 5 in the intermediate vocabulary list.

There is a vocabulary quiz of the forty words on my website, so just feel free to try it.

The link is in the description box.

Also, As I have said at the beginning of this video, I have prepared a test that you guys would love.

The test will cover from the sixth to the tenth lesson.

The test format is the same as TOPIK, so you can use it to prepare for TOPIK.

That’s it for today. You guys did a great job! High five!!

Today we learned quite deeply about these expressions, but how was it?

Were you following me? Yes?

역시 여러분! 똑똑하시네요! 잘 하실 줄 알았어요!
I knew it! You guys are so smart! I thought you would do it!

A wonderful gift for those who are taking the Intermediate Level of Test of Proficiency in Korean (TOPIK)!...

여러분, 안녕하세요. 토미입니다. I guess you guys have been waiting for this class! Finally, I am going to start the intermediat...

안녕하세요. 토미입니다. Let's chin up and learn Korean together! Today’s grammar is 아/어 가지고 "and (then)", -을/를 가지고 "with / u...
Home
Intermediate Korean

My name is Tammy, and I am a trilingual speaker who can speak Japanese, English, and Korean.

On Youtube, I am teaching Korean lessons as an Edu-tuber on language education.