Let’s have fun learning Korean! Today, I will teach you how to type Korean on your smartphone.

Of course, you can write Korean on your textbook or notebook by hand, but if you can type Korean on your smartphone, you will be able to use the Internet, which will greatly expand your world of using Korean.

In today’s class, I’d like to show you all the Korean input settings in iPhone and Android, and how to type Korean using both keyboard style and 10-key style.

How to set up Korean language input: iPhone version

First of all, in order to input Korean on the text input screen, you need to add the Korean keyboard. 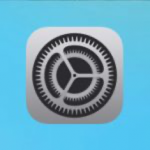 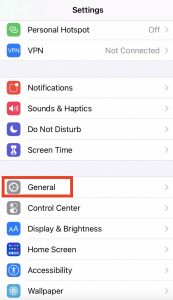 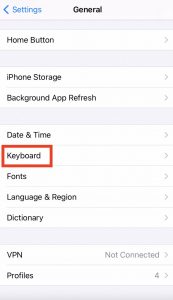 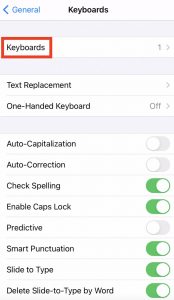 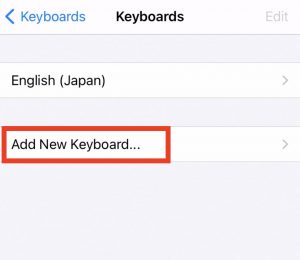 Select “Korean” from the list of languages that comes up. 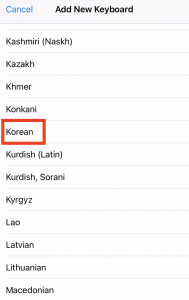 Then, you will get two options: “Standard” and “10 Key.”
You can choose both or either one of them.

However, for beginners, I recommend using “Standard.”

Here, for the time being, please select both choices and press “Done.” 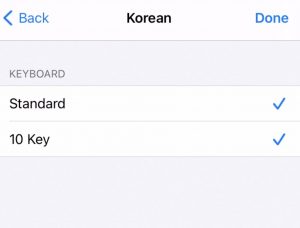 The setup is now completed.

Go back to the home screen, open any application where you can open the keyboard.

Press and hold the globe symbol on the bottom left, and select Korean,which is 한국어. 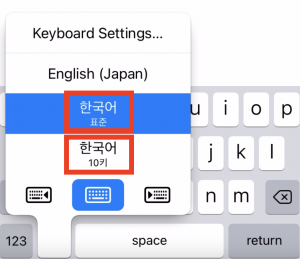 How to set up Korean language input: Android version

In the case of Android, the input setting may be a little different for each device.

There is also a difference between devices that have Korean input from the beginning and some of them don’t have it.

In today’s class, I’d like to explain based on my device, ZenFone4 MAX.

We will also set Korean input using an application called Gboard, which is in ZenFone4 MAX from the beginning as the default.

If you don’t have Gboard in your device, you can download it from the Play Store.

Please search for Gboard on the Play Store and you can find it. 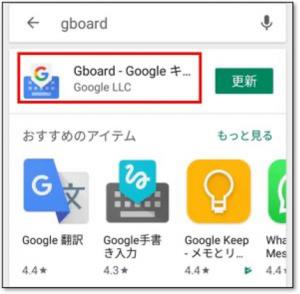 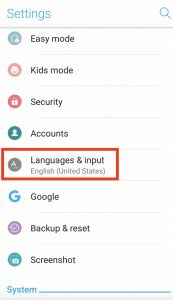 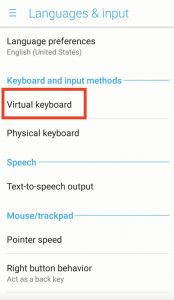 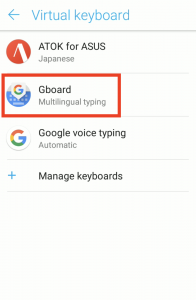 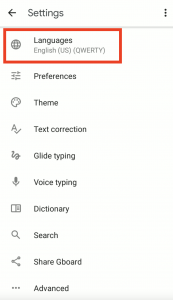 Select “ADD KEYBOARD” at the bottom. 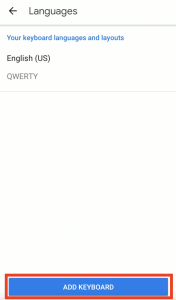 Enter “Korean” in the search window at the top of the screen, then select “Korean” from the search result. 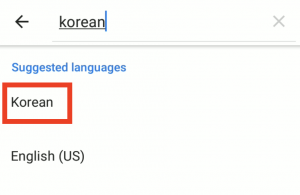 Select “2-Bulsik” and “10 key” from the options displayed, and then select “Done” in the lower right corner. 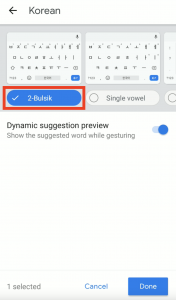 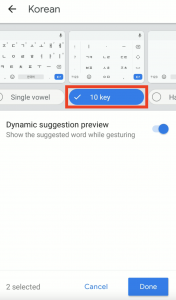 If your screen becomes like this, your settings are complete. 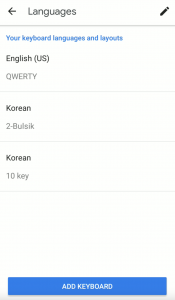 Try entering text somewhere, such as in the search window. 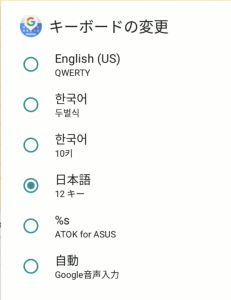 If your keyboard is set to ATOK or if the globe symbol does not appear, swipe the device screen from top to bottom on the stage you can enter text.

Then, select “Change Keyboard” that appears. 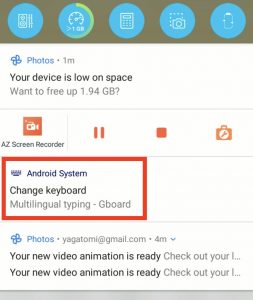 Next, select “Gboard” from the options on the list. 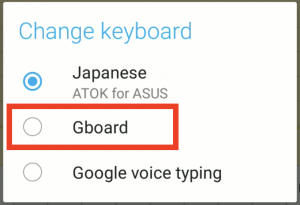 However, as I mentioned earlier, the version of Android may slightly differ from device to device, so please check the display in your device carefully.

How to type Korean: Keyboard input

Let’s take a look at the first method of typing Korean.

This is the same as typing Korean on a computer keyboard. 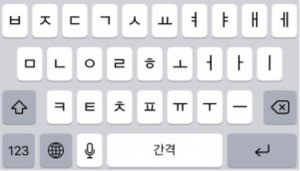 As you can see, most of the consonants, vowels, and diphthongs are displayed on the default keyboard.

If you want to type tense consonants, press the arrow on the left once. 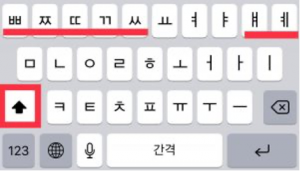 There will also be diphthongs ㅒandㅖ on the keyboard.

Korean characters are made up of three elements: consonants, vowels, and final consonants.

When you type Korean, you type in this order.

For example, when you write 토미, it would be ㅌ+ㅗ+ㅁ+ㅣ.

So if you are a beginner, I recommend you first start typing with the standard keyboard, and once you get used to it, you can try the 10-key version.

How to type Korean: 10-Key input

The arrangement of characters on the 10-key Korean keyboard looks like this! 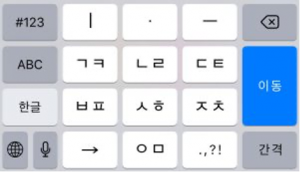 The first row is vowels, and the second and third rows are consonants.

This 10-key keyboard is a bit difficult to get used to.

In addition, there are two typing methods: tapping and flicking.

I would like to explain each of them here.

In the case of typing by tapping, it is easier if you can imagine Korean characters as completing broken down into parts.

First, the consonants are the same as what you can see.

By the way, if there is a tense sound, you can type it by tapping three times.

I have made a list of consonants and how to type them, so please refer to it.

Next are the vowels.

Vowels are grouped into three keys.

Korean vowels are made up of three main elements: the long vertical bar（ㅣ）, the long horizontal bar（ㅡ）, and the short bar（・）. These are the three keys that represent these elements.

You can make vowels and diphthongs by tapping on the elements that apply, starting from the left or the top. This may be a bit confusing, so I’ve made a list for your reference.

Flick typing is on iPhone, but I’ve never done it on Android. Here, I would like to show you how to use flick typing on iPhone.

First, you have to learn what characters can be selected from each key. For consonants, you can type ㄱ by flicking left, ㅋ by flicking right, and ㄲ by flicking down. 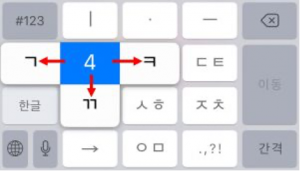 Next, for vowels, first memorize what characters can be selected from each key.

「ㅣ」is the key for the vowels that contains ㅣ, such as ㅏㅑㅓㅕ. 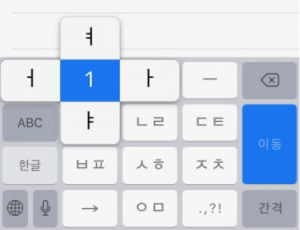 「・」 is the key for the vowels with two strokes, such as ㅏㅜㅓㅗ. 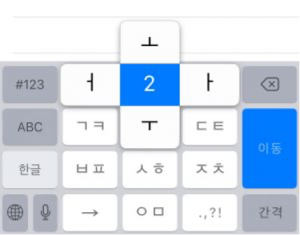 「ㅡ」 is the key for the vowels with ㅡ, such as ㅛㅜㅠㅗ. 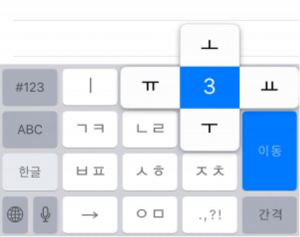 As you can see, there are some vowels that overlap, so you can use the key that is more convenient for you.

A diphthong can be typed in by selecting the two vowels that make it up.

For example,If it’s ㅒ, you can make it with ㅑandㅣ.

To summarize, if you are using the standard keyboard input, it is easy to get started because you can see most characters right away.

However, the width of the keys is very narrow that you might often end up typing the wrong one.

If you can use the flick input and other methods, you can type Korean much faster, but you need to memorize what characters each key has to begin with.

Now, you can even type Korean using your smartphone!

I’m already excited and thrilled for you!

안녕하세요. 토미입니다. The theme of today’s class is 【복권에 당첨되면 뭘 하고 싶어요?】 “What would you want to do if you win the lottery?” ...

안녕하세요. 토미입니다. The theme of today’s class is【하나 물어보고 싶은데요】“I’d like to ask you one question.” Today, we’ll learn ab...

안녕하세요. 토미입니다. Are you excited to learn Korean? I am teaching Korean so that you guys can speak Korean fluently and...

안녕하세요. 토미입니다. Hello, my name is Tommy. Let’s have fun learning Korean together from today! Through this channel, y...

Tomi A wonderful gift for those who are taking the Beginner Level of Test of Proficiency in Korean (TOPIK)!...
[Learn Korean E6] Final Consonants, Double batchim, and Pronunciation Rules
[Learn Korean E8] How to Type Korean Keyboard on Windows 10 and Mac
Home
Elementary Korean

My name is Tammy, and I am a trilingual speaker who can speak Japanese, English, and Korean.

On Youtube, I am teaching Korean lessons as an Edu-tuber on language education.